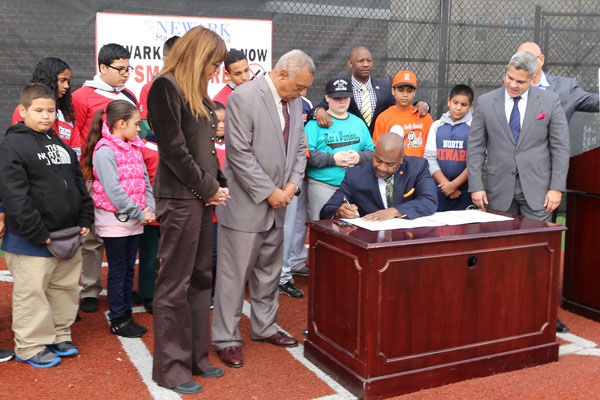 Mayor Ras J. Baraka signed into law a municipal ordinance that bans smoking within municipal parks and recreation facilities and within 50 feet of a municipal building’s entrance, exit, windows, or ventilators, today, at Kasberger Field, in the City’s West Ward.

At the ceremony, he was joined by the Municipal Council sponsors of the legislation, North Ward Council Member Anibal Ramos, Jr., and Council Member-at-Large Carlos M. Gonzalez, community members, and tobacco-free activists.

The ordinance signed by the mayor also expands the definition of smoking to include hookahs and electronic cigarettes. Smoking is already prohibited in City Hall and other public buildings since the City’s first smoke-free ordinance went into effect in 1991.

“I am proud to join with our Municipal Council and administration to reduce the tragedy caused by second-hand smoking, by making it illegal in our parks, recreation centers, and around our municipal buildings," said Mayor Baraka. "This legislation will help us create a healthier Newark, and continue to transform Newark into a City we can all believe in.”

“Knowing what we know today about tobacco, there is absolutely no reason for children to be exposed to harmful second-hand smoke while they are playing in any of our parks," Councilman Ramos said.

The ordinance also includes electronic smoking devices such as e-cigarettes, vape pens and hookah pens, which have becoming increasingly popular in recent years. This year, U.S. Centers for Disease Control and Prevention found an alarming increase in e-cigarette use by youth. In 2009, the U.S. Food and Drug Administration found toxins and carcinogens in tested electronic cigarettes. Since then, many studies have shown health concerns with using and being exposed to electronic vapor smoke, which contains toxins including nicotine.

“I want to congratulate the Mayor and the City Council for coming together to pass this much needed legislation,” said Dr. Vinnie DeVincentis, the president and director of the North Newark Little League/Newark RBI, which plays its home games at Kasberger Field. “It will go a long way towards making our City parks cleaner and healthier for the young people who use them.”

“Newark joins more than 250 New Jersey communities that restrict smoking in outdoor public parks,” said Karen Blumenfeld, Esq., Executive Director of Global Advisors on Smokefree Policy (GASP) which tracks tobacco control policies. “Secondhand smoke is a known asthma trigger and there is no safe level. With Newark’s childhood asthma rate at one out of every four children, a 100 percent smoke-free parks policy makes sense. Plus, it protects the environment from tobacco waste where children play, and can lower park maintenance costs.”

The ordinance signed by the mayor also expands the definition of smoking to include hookahs and electronic cigarettes. A hookah, also known as shisha, argileh, nargile, hubble-bubble, water pipe, goza, maasal and sheesha, is a water-pipe in which scented tobacco is burned using coal and becomes smoke. The smoke passes through an ornate water vessel and is inhaled through a hose.

“While many believe smoking a hookah is glamorous and exotic, it is every bit as addictive and dangerous as smoking a cigarette,” Councilman Ramos said. “Smoke from a hookah contains the same cancer-causing chemicals as cigars and cigarettes, coupled with high carbon monoxide intake.”

“It’s important to help our youth not become addicted to nicotine and smoking,” Councilman Gonzalez said. “We need to treat them just as we would treat conventional cigarettes.”