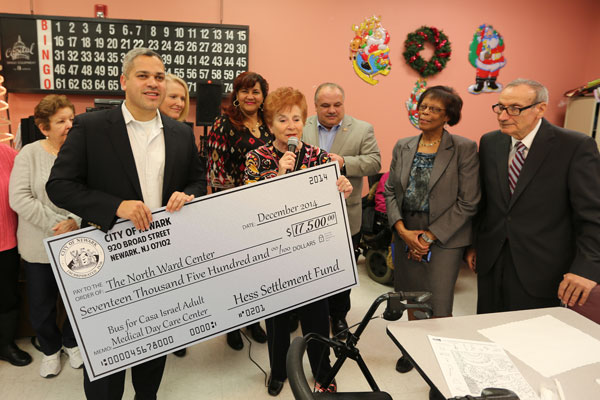 “Casa Israel is a lifeline for many of the seniors in our community,” said Councilman Ramos. “When I heard about Casa Israel’s need for a new bus, I did not hesitate to help because our seniors deserve it.”

Councilman Ramos was joined by Councilman-at-large Luis Quintana during a check presentation at Casa Israel on Wednesday, December 10.

“Casa Israel is the best run senior program in Newark without question,” Councilman Quintana said. “I am proud to have supported this grant to help the seniors in our community.”

The grant came from a 2012 settlement of a lawsuit between the City of Newark and the Hess Corporation that dedicated $7 million to health and education programs and $5 million for other programs that directly benefit the city.

“We are thankful to the entire City Council for approving this grant and to Councilman Ramos for taking the lead,” said Adrianne Davis, the Co-Founder and Executive Director of The North Ward Center. “These are much needed funds that will help us better serve our seniors.”

Fran Adubato thanked Councilman Ramos for being so responsive when she told him about the need for a new bus.

“Councilman Ramos cares about our seniors and this grant is proof of that,” Adubato said.

Kate Flores, the director of Casa Israel, said the Center is looking to replace one of its older buses. A new bus costs as much as $65,000. The buses are used to transport residents from their homes to the Center and back as well as to doctor’s offices and social outings.

“The buses are our workhorses and take a real beating,” Flores said. “We are eager to add a new bus to our fleet.”

“This grant will improve the quality of life for our seniors,” said Stephen N. Adbuato, the founder of The North Ward Center and Casa Israel.