Councilman Anibal Ramos Jr. was joined by Newark City Council colleagues Gayle Chaneyfield Jenkins and Luis Quintana as well as union officials at St. Michael’s Medical Center on Wednesday to denounce a report recommending the hospital be turned into an ambulatory care center.

“We’re going to put our boxing gloves on and we are going to make sure we fight to keep St. Michael’s Medical Center in the community,” Ramos told more than 200 employees who had gathered in the hospitals lobby for a rally. 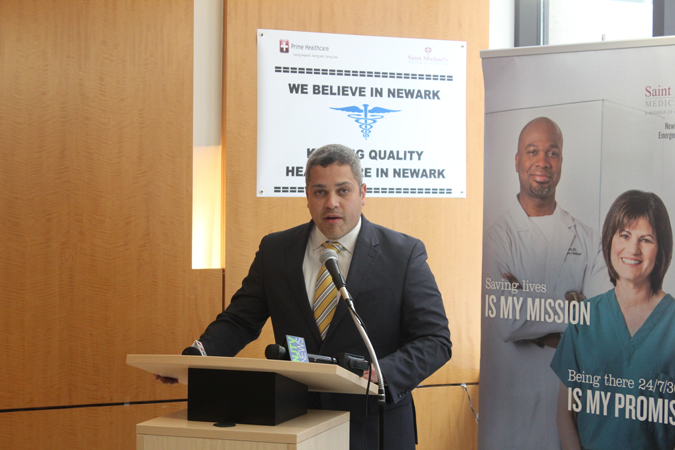 A report from Navigant Consulting concluded there were too many hospital beds in Newark and recommended converting St. Michaels from an acute care hospital into an ambulatory care, or same day health center.

But Ramos said the move is only a “pathway to closure.” Ramos said similar recommendations were made for both Columbus Hospital in the North Ward and St. James with mixed results.

“I’ve lived it through Columbus Hospital. I’ve lived it through St. James Hospital and Councilman Quintana and I over the last seven years have been struggling to work with investors in both of those properties to revitalize our communities,” Ramos said. “It’s just not about economics. It’s about patient care. And we cannot have a monopoly in the city of Newark when it comes to the delivery of quality health care.”

Ramos said St. Michael’s is a vital institution in Newark with a long and proud history. The hospital’s pending sale to Prime Healthcare Services is being reviewed by the state.

“Our city is growing. Our downtown district is thriving and St. Michael’s hospital is an important part of the renaissance and development of this city,” Ramos said. “There is a legitimate buyer for the hospital. So what risk does the state of New Jersey have by supporting this institution?”

What can you do? Sign the online petition to save St. Michael's.