Read this article as it originally appeared on nj.com

The mayor, who first mentioned the possibility of an ID program at town hall on Wednesday, said the program would give undocumented Newarkers an identification card that could give them access to city services and the ability to hold a bank account.

"We're working hard to get it done by next year. We are bringing together all kinds of stakeholders," Baraka said during an interview today. 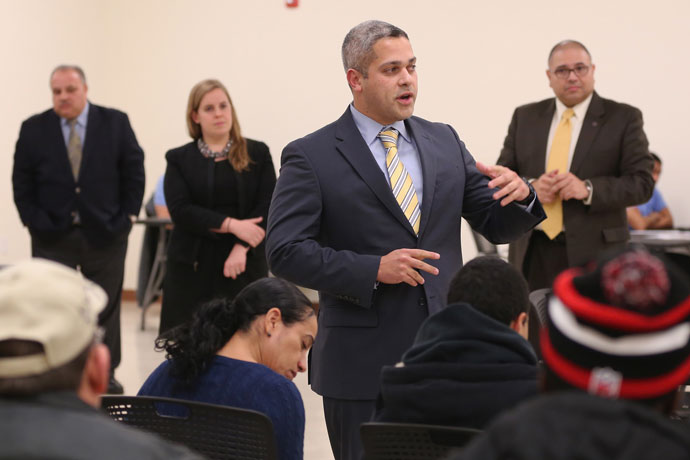 Councilman Ramos discussing the Affordable Care Act recently with a group of North Ward Latino residents at the Vince Lombardi Center. Pictured in the background are: Councilman-at-large Luis Quintana, White House Associate Director of Public Engagement Bess Evans and Dennis E. González, executive officer for the Office of the Secretary for the U.S. Department of Health and Human Services Region II.

Dubbed IDNYC, the card is aimed for those without a government-issued ID, including the homeless, elderly and an estimated 500,000 immigrants in the city who live in the U.S. without legal documentation.

The card, which became available on Monday, also allows holders to get free memberships at many of the city's signature cultural institutions as well as other discounts.

Baraka said he other mayors from across the country talked about the potential for a municipal ID program during a recent conference hosted in New York City by de Blasio.

"We had an incredible opportunity to dialogue with the secretary of homeland security, folks from the immigration office, mayors from around the country," Baraka said. "The municipal ID is one of many ideas to make undocumented residents a part of the city."

Ari Rosmarin, Public Policy Director for the New Jersey chapter of the ACLU, said a municipal ID program could prove a major asset for undocumented immigrants and other citizens of Newark.

The effort, however, carries the inherent risk of having the cards serve as a de facto database for federal authorities that could seek to deport them, or subject carriers to discrimination by law enforcement or other public entities.

“A municipal ID program, if not designed and implemented well, can turn into a scarlet letter for undocumented folks,” he said.

In comments made at the Wednesday meeting, Baraka assured attendees that the city has "no relationship" with federal immigration authorities, and had no intention of placing any citizens in their crosshairs, which Rosmarin said he found encouraging.

“Municipal ID card programs I think throughout the country have proven to be an effective way of bringing immigrant communities out of the shadows and more fully into civic life,” he said.

A municipal identification program in Newark could expand the rights of undocumented residents even further.

“I think Washington is counting on us to get it done," Baraka said. “These are things we can agree on locally. We can get that done here without Congress involved."

“Newark has always been a city of immigrants,” he said. “An ID program will help bring people out of the shadows who would otherwise be reluctant to report crimes and seek city services.”

Should Baraka's plans become reality, Newark would join cities such as Trenton and Asbury Park in offering municipal identification cards to residents, regardless of their immigration status.