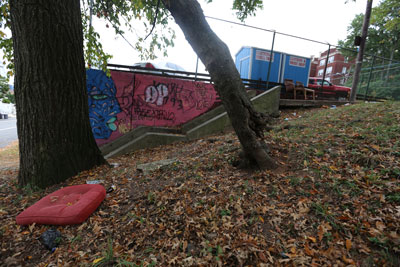 “The park is at the gateway to the Mount Prospect neighborhood, but it has become a dumping ground and is not a place where families would want to take their children,” Ramos said. “My goal is to turn this neglected space into a crown jewel of the North Ward – a park that the entire neighborhood will be proud of.”

As part of its proposal, Suburban Consulting Engineers will hold meetings with the community to gather input about the conceptual design options and the development of a “wish list” of proposed improvements. Bid documents will be prepared with cost estimates for the layout of all proposed facilities and upgrades.

Suburban Consulting Engineers has worked on beautifying and rehabilitating other parks in the city, including Ironbound B Field, Branch Brook Park, West Side Park and Weequahic Park.

Ramos has taken a leading role in restoring parks and recreational facilities in the North Ward and throughout Newark since he was elected to the City Council in 2006. Under his leadership, School Stadium, Kasberger Field and Elwood Park have been restored and the Waterfront Recreation Center was built.

Last year, Ramos sponsored legislation placing a question on the ballot that passed in November with widespread support to create an Open Space Trust Fund to acquire, develop and maintain parks, and neighborhood playgrounds and ballfields in Newark. The fund is expected to raise $1.1 million annually.

“My hope is that the Open Space Trust fund can be used to restore the park,” Ramos said. “This is exactly the type of project we envisioned funding when we put the ballot question to voters last year.”