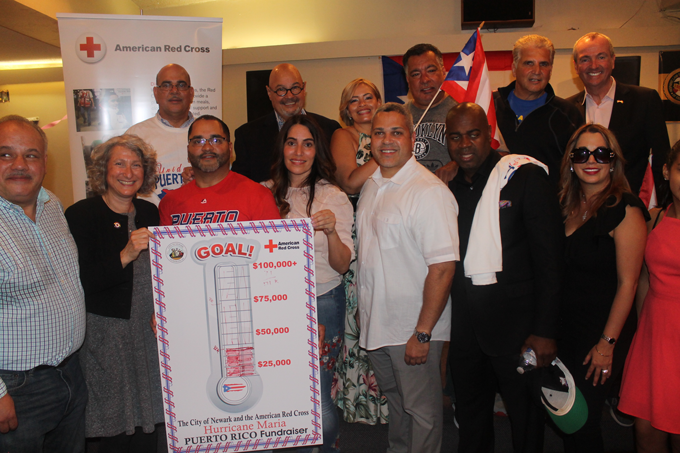 “We’re inspired and honored to be here in Newark with our government, corporate and community partners joining together to support our neighbors in Puerto Rico," said Jocelyn Gilman, executive director, American Red Cross New Jersey

The event was hosted by state Sen. M. Teresa Ruiz, Newark North Ward Councilman Anibal Ramos Jr. and Newark Councilmen-at-Large Luis Quintana and Carlos Gonzalez and was supported by the City of Newark.

The fundraiser was well on its way to reaching its goal of $100,000 when word was delivered by Newark Mayor Ras Baraka that United Airlines donated $100,000 to the effort.

"The outpouring of support from the community was overwhelming," Quintana said.

"Every little bit helps, not just the amount of money raised, but the number of people who are part of the effort," Murphy said. "We can all do more. I'm glad the governor sent 11,000 people down there. That's a great start. We need to continue to do more. I'm looking in the mirror when I say that."

Ruiz thanked the corporations for the large donations, but also thanked everyone who made small donation, including local school children and people who deposited money into donation cans around the city.

"I want to take an opportunity to thank everyone who was involved in today's relief efforts," Ruiz said. "Puerto Rico will rise and return back to its fullest glory because of the generosity of the people of this great city and state. We received some big checks and some small ones, but the energy and hope that they all came in with will make a difference to those suffering in Puerto Rico. It is truly humbling to see the great spirit of human nature at its core coming together for others."

Councilman Ramos said it was important for the Puerto Rican leaders in Newark to rise to the challenge because the city is home to the largest number of Puerto Ricans in the state.

"Many, if not most, of the Puerto Ricans who live in Newark have some connection to the island, whether family or friend," Ramos said. "Having this fundraiser today is a way for us to channel our anxiety into doing something positive and productive for all those who are suffering. Throughout this weekend, the community came together. Our collective efforts will make a difference."

Those who wish to donate can do so by making a check out to The American Red Cross/Hurrican Maria/Puerto Rico. All proceeds will go toward relief efforts in Puerto Rico.

On Puerto Rico, about 450 Red Cross workers are helping to reconnect families and distribute critical relief supplies, including food and water. The Red Cross has sent in satellite receivers, which are driven around on trucks that also carry portable generatos, laptos and powerstrips that allow people to charge their phones and communicate with loved ones.