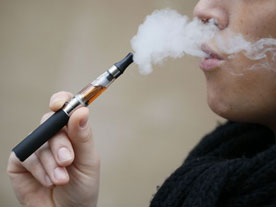 “Today we are making Newark a healthier city for our children by banning smoking in parks and recreational facilities,” Ramos said. “There is no reason children should be exposed to harmful second-hand smoke.”

The resolution also expands the city’s smoking ban to include areas within a 50-foot radius of all entrances, exits, vents and windows of public buildings and prohibits smoking in any vehicle owned or operated on behalf of the city.

Ramos said he and Councilman Carlos Gonzalez sponsored the resolution because it was time to update the city’s anti smoking laws, which have banned public smoking in City Hall and other public buildings since 1991.

“The law that was on the books did not address smoking in playgrounds, recreational facilities or the entrances to city buildings,” Ramos said. “The law also did not even mention hookas or electronic cigarettes.”

A hookah, also known as shisha, argileh, nargile, hubble-bubble, water pipe, goza, measell and sheesha, is an Arabic water-pipe in which fruit–scented tobacco is burned using coal and becomes smoke. The smoke passes through an ornate water vessel and is inhaled through a hose.

“While many believe smoking a hookah is glamorous and exotic, it is every bit as addictive and dangerous as smoking a cigarette,” Ramos said. “Smoke from a hookah contains the same cancer-causing chemicals as cigars and cigarettes.”

Some establishments in Newark have taken advantage of the ambiguity in the law, creating indoor hookah lounges. The resolution would make it illegal to smoke hookas in a bar, restaurant or other establishment where the principal business is the sale of food for consumption on the premises.

The resolution also includes electronic cigarettes, which have becoming increasingly popular in recent years. While they are viewed by some as a safer alternative than tobacco products, the federal Food and Drug Administration earlier this year proposed banning the sale of electronic cigarettes to minors and requiring health warning labels and approval for new products.

“The jury is still out on how safe electronic cigarettes are,” Ramos said. “In the meantime, we need to treat them just as we would treat old-fashioned cigarettes.”