Newark North Ward Councilman Anibal Ramos Jr. announced today that an abandoned home that had been an eyesore on Parker Street in Newark’s Forest Hill neighborhood for nearly two decades has been finally torn down.

Crews from the City of Newark began razing the building Thursday morning, reducing the 100-year old home that had been the bane of neighbors into a pile of rubble by afternoon.

Getting to this point was not easy, Ramos said, because the home is located in the Forest Hill Historic District and required state approval for demolition.

“We’ve lived for too long with this eyesore in our neighborhood,” Ramos said. “Nobody should live next to an unsafe, abandoned building. I made a promise to residents that we would get this done and I’m proud today that I was able to keep my promise.” 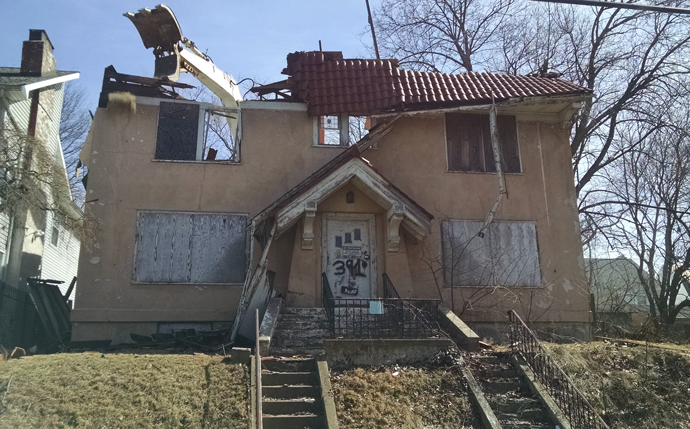 A long abandoned home on Parker Street in the Forest Hill neighborhood in the process of being razed.

Members of the Forest Hill Community Association made demolition of the home one of their priorities.

Paul A. Agostini, the communications director of the Forest Hill Community Association, said the demolition is a welcomed improvement.

“Residents of the Forest Hill Historic District will be astonished when they come home today and learn that a longstanding eyesore in the community has finally been taken down,” Agostini said. “This demolition is going to immediately bolster their property values and improve the landscape of our neighborhood.”

Ramos credited the administration of Mayor Ras Baraka and Patrick Council, the director of the city’s Department of Neighborhood Services, for working diligently to ensure the property was demolished.

Sitting on a 100-foot wide double lot, the 1,600-square-foot stucco home was acquired in 2008 by SJK Asset Corp. through foreclosure. At that point, the home had been abandoned for 15 years. SJK proposed splitting the lot and building two homes. But a public outcry ensued and the city required the developer to first get approval from the Newark Landmark and Historic Preservation Committee.

SJK sued Newark over the validity of the city’s preservation ordinance. The city settled the lawsuit, agreeing to buy the property from SJK. The city proposed selling the house with preservation restrictions.

In 2011, the city entered into a contract with a local architect to sell the property. But two years later, the architect proposed splitting the property and constructing two homes. Again, neighboring residents objected. 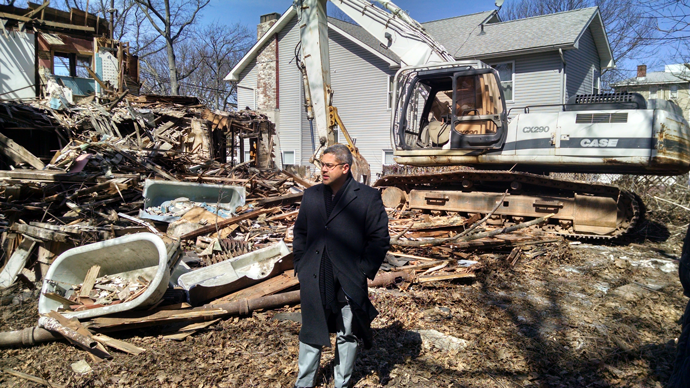 Councilman Anibal Ramos Jr. inspects the rubble after a long-abandoned home on Parker Street was razed by the city.

Residents then asked the city to terminate the contract, demolish the house, and sell the lot for a single family home.

Ramos said whoever purchases the home will be required to build a single-family home in accordance with the U.S. Secretary of the Interior’s Rehabilitation Standards for new construction. The design will also require approval of the Newark Landmarks Historic Preservation Commission and the New Jersey Historic Preservation Office.

“Unfortunately, this house was beyond salvageable,” Ramos said. “But whatever replaces it will complement the homes in the neighborhood.”

Agostini praised Ramos, Jr.  for responding to the concerns of his constituents seeing this project thru to its completion.

“This is a tremendous follow-up to the recent successful renovation of the long shuttered Wright-Clark mansion on Mt. Prospect Ave.,” Agostini said.

The Wright-Clark mansion was another eyesore in Forest Hill that had been abandoned and deteriorating for more than 25 years. As a result of Ramos’ efforts, the mansion was purchased by RPM Development Group and converted into seven new affordable apartments.