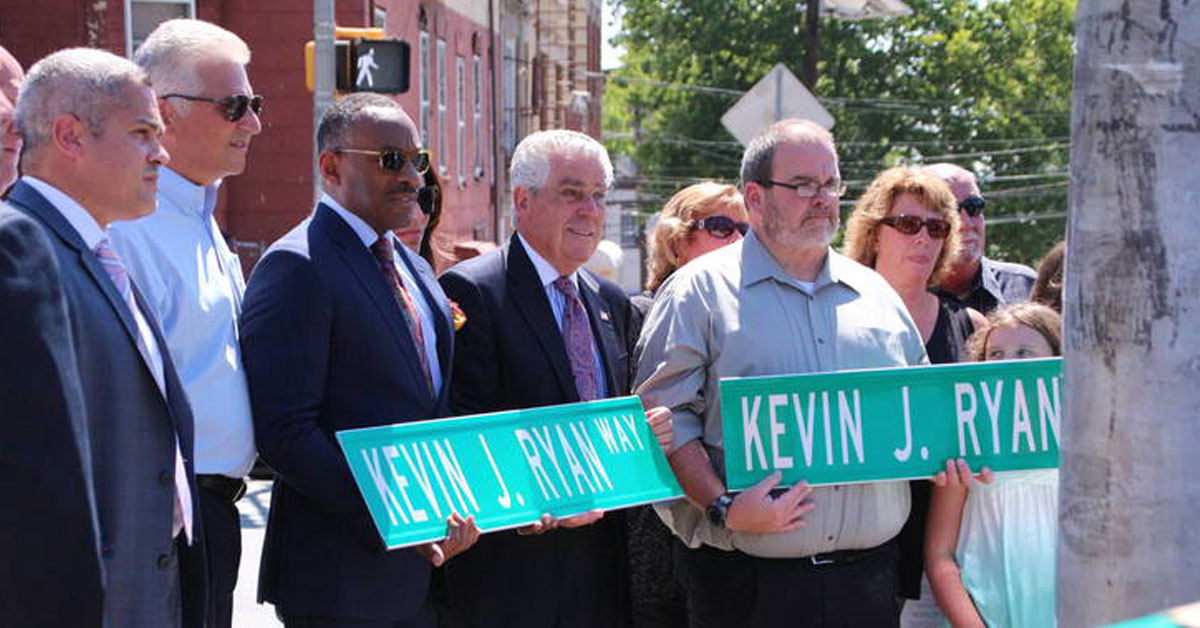 “It’s a fitting tribute to someone who dedicated his life to the county,” said his brother, Gerald Ryan, after helping unveil the new street sign. “This was his life, with the cathedral and the sheriff’s department.”

Ryan, 49, died June 20 while off-duty, a sheriff’s spokesman previously said. He worked in the sheriff's department for about 25 years and had a brief stint in the state Assembly, where he represented parts of Essex County.

Law enforcement, state and local officials today remembered Ryan at a small ceremony in front of the Cathedral Basilica. Ryan’s funeral services were previously held at the church, where he was also posthumously named chief.

"I am proud to sponsor today's street dedication," Ramos said. "Kevin was best known for his service to the Sheriff's Department, but he was equally as committed to the Basilica. As I drive along Clifton Avenue, I will forever be reminded of my friend Kevin and his kindness to others and commitment to service."

Essex County Sheriff Armando Fontoura said Ryan and he would often communicate late at night or early in the morning when “crazy things would happen.”

“Too many to speak of one,” Fontoura said when asked what his fondest memory of Ryan was. “He was just a terrific guy.”

Ryan was known as the "go-to person in times of emergency and crisis," Essex County Executive Joseph DiVencenzo, Jr. previously said in a statement. The county executive also submitted an ordinance to the freeholder board to consider renaming the Sheriff’s Patrol Building on Market Street after Ryan.

State Sen. Teresa Ruiz hoped the late undersheriff would be remembered forever by others through the renaming of the street.

"While we're somber, this is a moment for us to reflect and to really learn from ... an individual who brought us such great hope and life and taught us what true friendship is in public service," Ruiz said.

Ryan most recently worked as a supervisor for the Field Operations Division, which includes the Patrol Division, Bureau of Narcotics, bomb squad, K-9 Unit and Emergency Management.

The late undersheriff also worked on task forces with the Federal Bureau of Investigation and supervised a protection detail for Pope John Paul II and several presidents.

Ryan was also honored as a Knight of the Equestrian Order by Pope Francis in 2016.